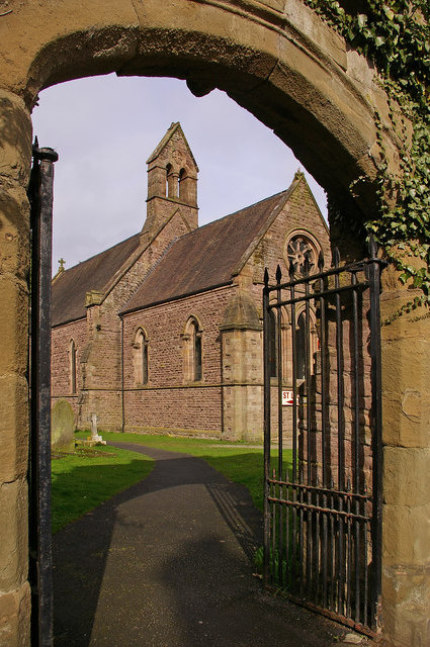 When Benjamin was 23, he married Mary Mills on 07 Jul 1771 at St. John's Parish Church in Hereford, Herefordshire, England. 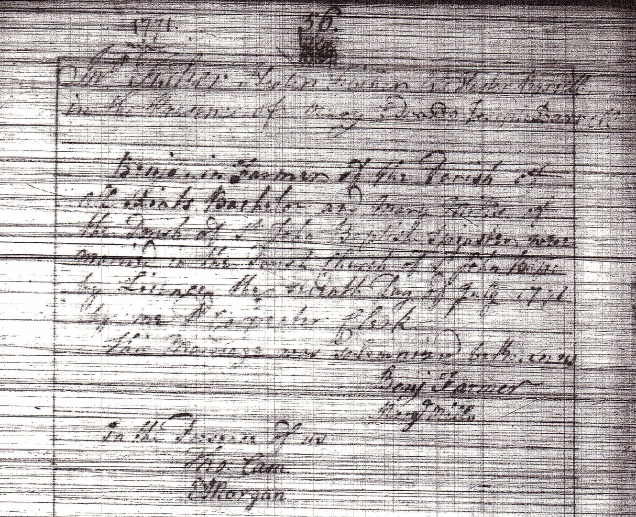 St. John's Church didn't actually exist, instead the people of St. John's "worshiped in a designated space within the cathedral building but (St.John's) was distinct from the cathedral clergy and services." (Source herefordcathedral.org) 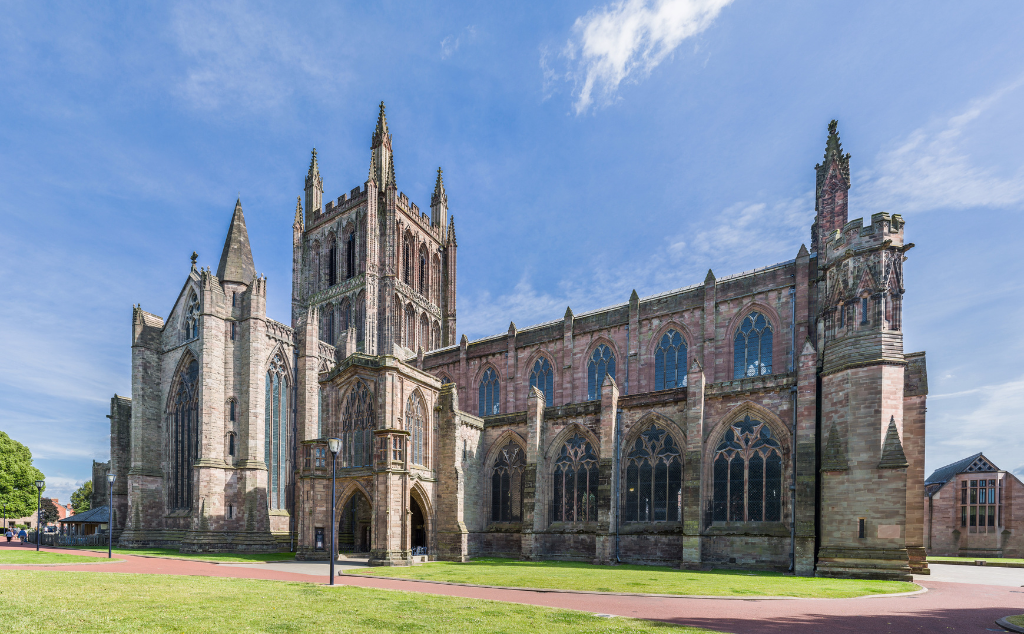 A designated space within Hereford Cathedral was used as St. John's Parish Church

A boy named James Oram was indentured as Benjamin Farmer 's apprentice on 17 Nov
1778 in Hereford, Herefordshire, England. This is also the first time that Benjamin's trade as a Gunsmith is mentioned. James was indentured for 7 years with his first day of duty being on the 17th December 1778. Benjamin was paid £10 by James' parents/guardians for taking him as an apprentice (In 1778, £10 would have the same spending worth of 2005's £628.50)

On 20 Dec 1781 the following article appeared in The Hereford Journal. It appears that
James Oram didn't take to the trade of Gunsmith and absconded from his apprenticeship.
The fate of James is unknown. 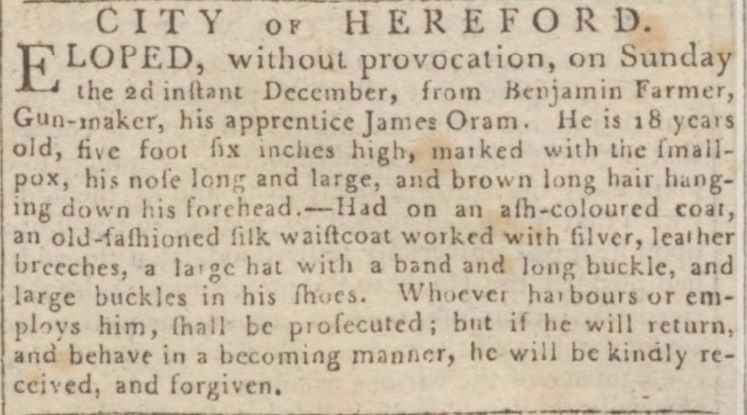 Benjamin eventually took another apprentice called Samuel Winter, who was indentured on
10 Nov 1783 in Hereford, Herefordshire, England. Samuel was indentured for 6 years with his first day of duty on 17th November 1783. Benjamin recieved the sum of £5 for taking him as an apprentice. (In 1783, £5 would have the same spending worth of 2005's £314.25).

On Wednesday 24th June 1789 an advert appeared in the Hereford Journal for a concert and ball to be held at Harding's assembly room in Hereford. Tickets were to be available from several places in the town including Benjamin's premises on Eigne Street. 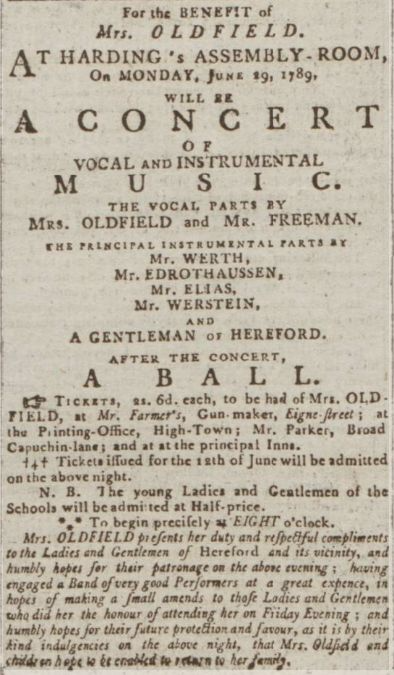 In 1791 Benjamin Farmer's name appears in the Hereford section of the Universal British
Directory:-

In 1795 Benjamin's son Henry, a sailor, makes his first will and testament and names
Benjamin as his sole executor of his estate.

In 1796 Benjamin's name is found among the voters for the County of Hereford Parliamentry elections listed in the Hereford poll book. Apart from giving us an idea of how Benjamin voted that year, this list also tells us that he owns a freehold property that is currently occupied by a Mr.Jones:-

Benjamin's name can be found twice in the 1798 UK Land Tax Redemption lists (this was a
lump some paid by the owner of a property to free it from being taxed). Firstly Benjamin
appears for his own residence:-

and secondly for the property that is still occupied by Mr. Jones and also someone called
Garnols:-

On 29th Dec 1798 Benjamin was one of the witnesses at the marriage of his eldest daughter Elizabeth:-

The next mention of Benjamin Farmer that I can find is in The Hereford Journal on
Wednesday 10th December 1800. An advert was placed by Benjamin for someone called
"T.C." who was looking for work as a park or gamekeeper.

It seems that Benjamin liked to help people looking for this type of work as a year later he
places another similar advert for someone called "J.H." in the same newspaper on 22nd Jul
1801.

Benjamin Farmer's name then appears in the 1802 poll book for Hereford again listing the
freehold that he owns - presumably Charles Jones is the same tenant as Mr. Jones as in
earlier poll books.

In 1810 the inhabitants of Hereford held a meeting regarding rumours of the stability of the
Hereford Old Bank. Ads were placed in newspapers announcing their support for the bank
and that they would accept its bank notes. Benjamin's name appears in two of these adverts - firstly in The Gloucester Journal on 6th Aug 1810:-

and secondly in The Worcester Journal on 9th August 1810:-

In 1818 Benjamin Farmer once again appears in the poll books for Hereford:-

An obituary appeared in the Hereford Journal on 5th December 1821:- 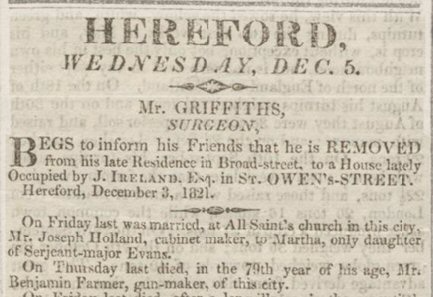 and in the same edition there was an annoucement regarding the auction of all of Benjamin's remaining possessions:- 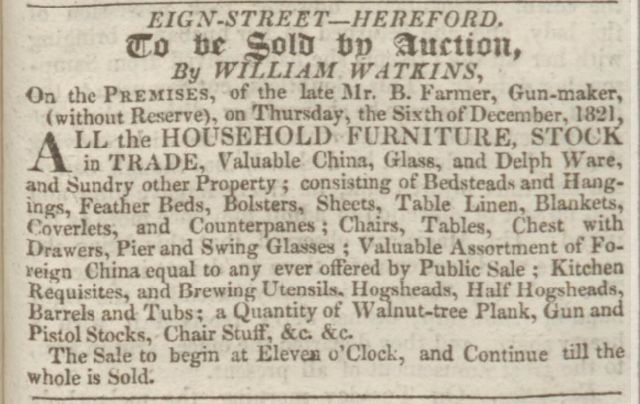 Benjamin had left a last will and testament, but neglected to name an executor. As a result
letters of administration were pleaded for and granted to his oldest daughter Elizabeth
Todd (nee Farmer):- 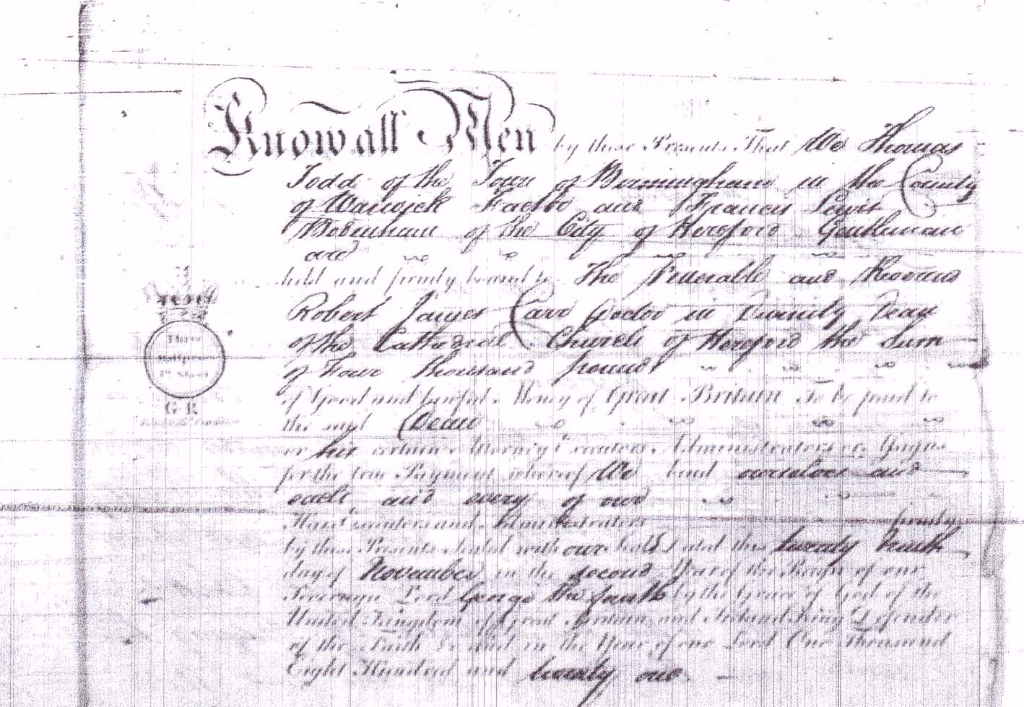 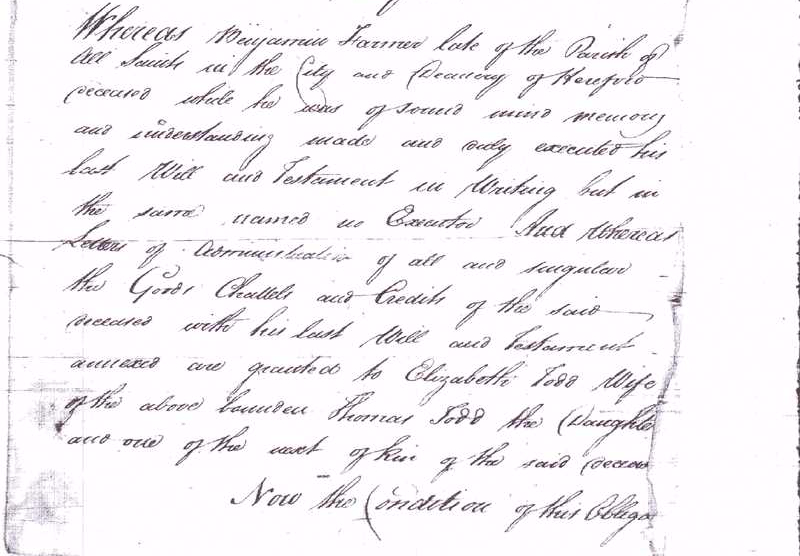 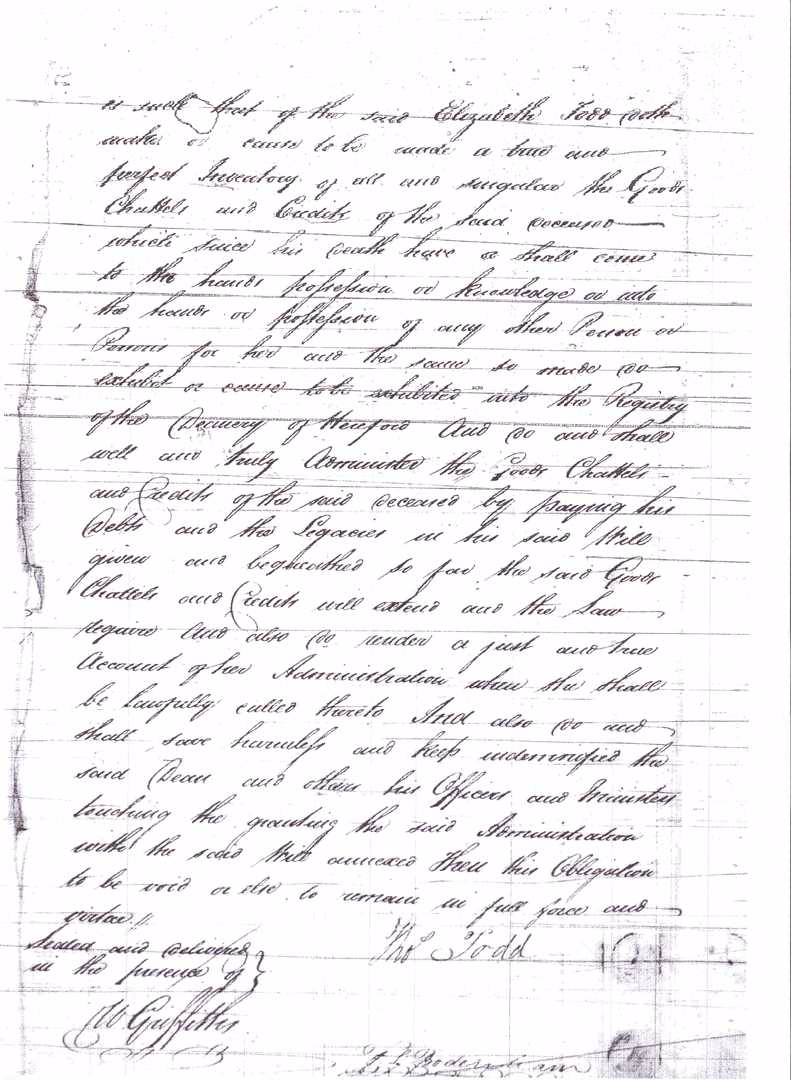 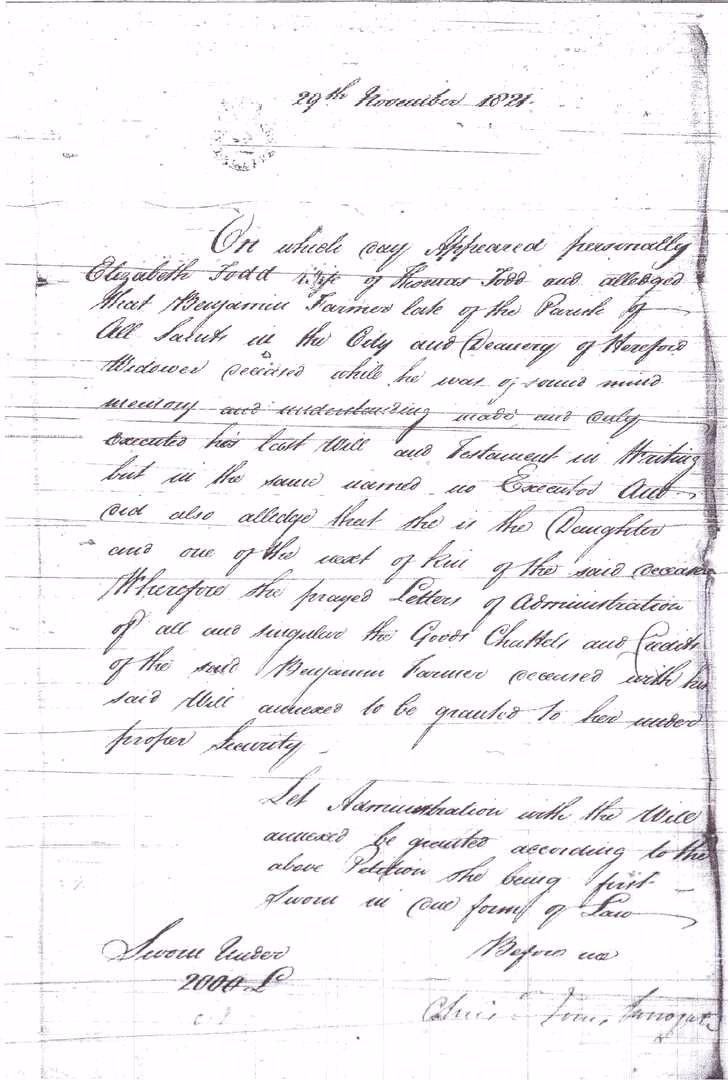 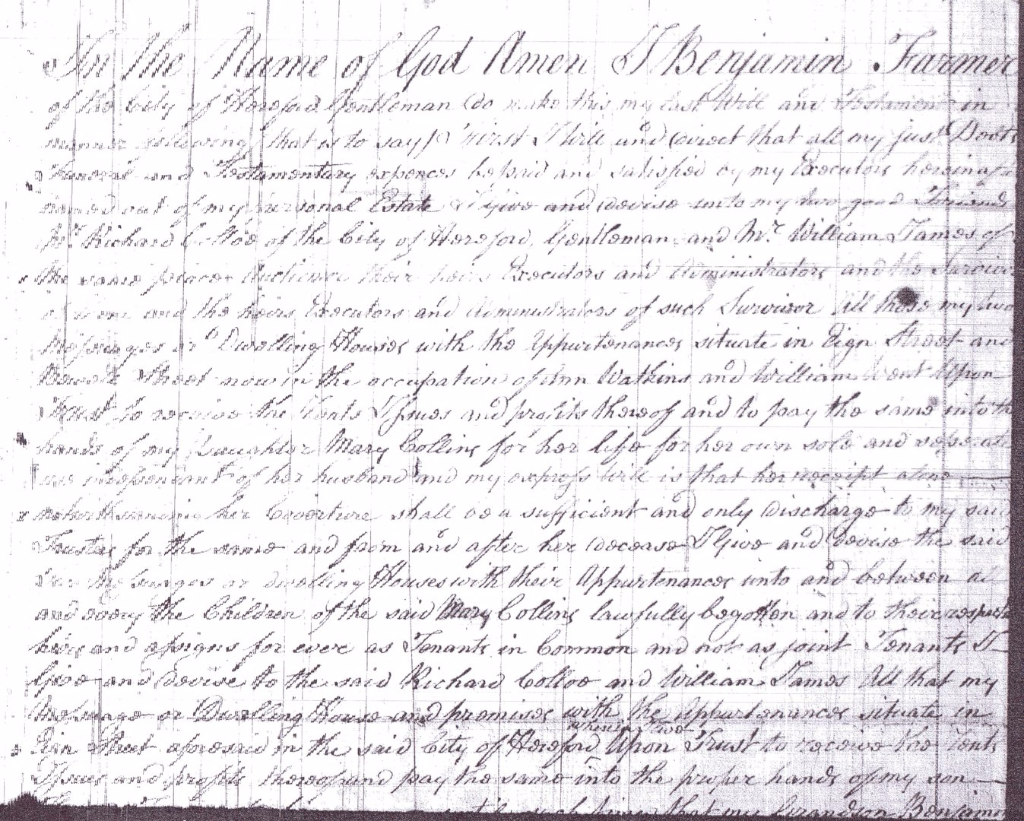 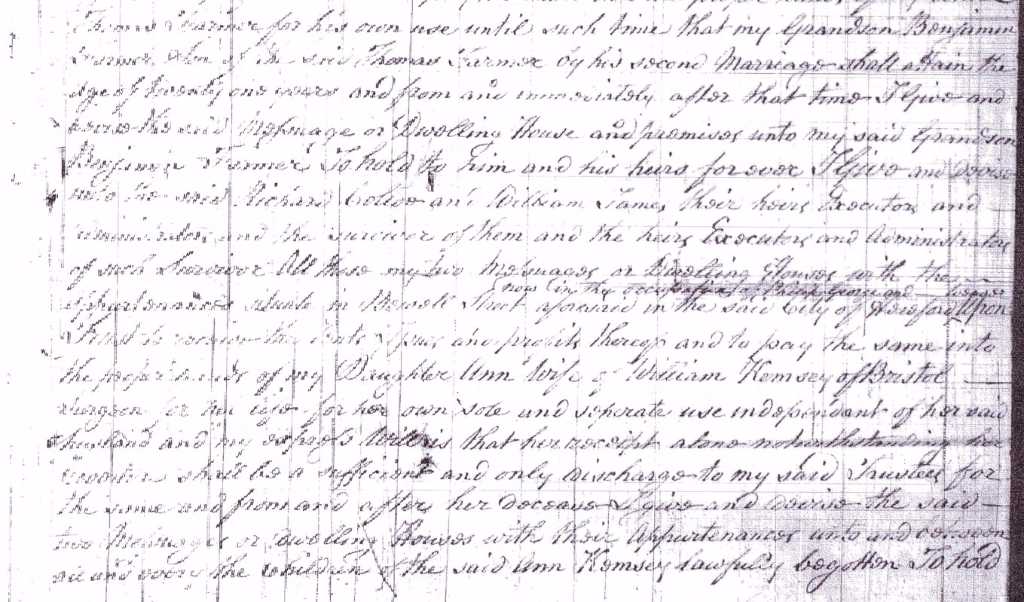 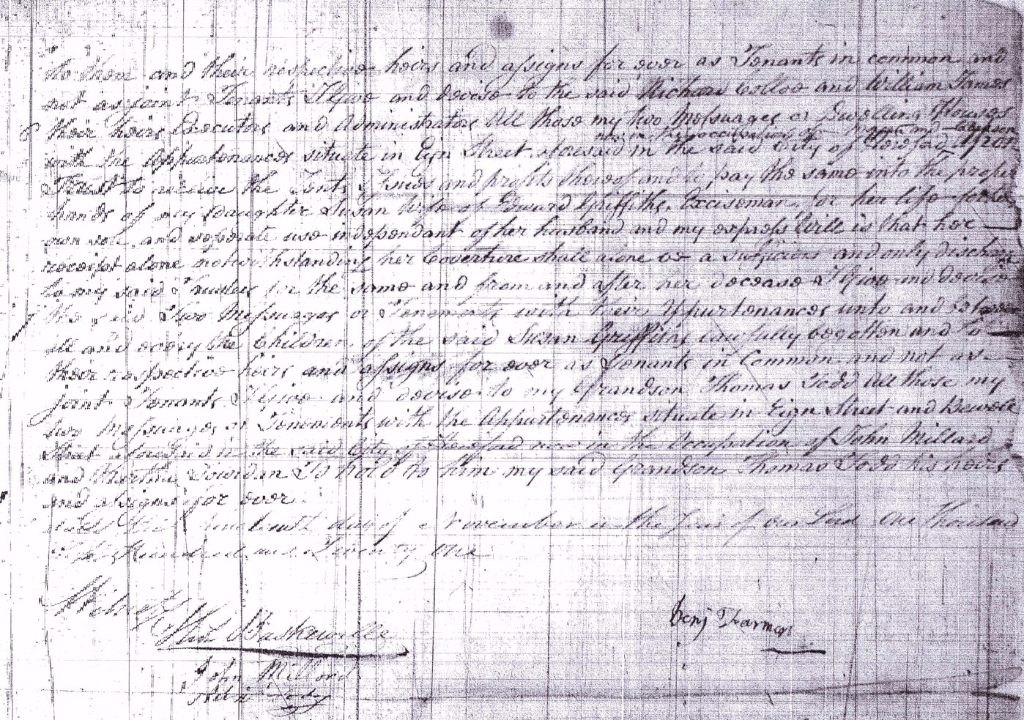 According to the Death Duty Register, Benjamin wrote his will on 19th November 1821 and
proven on 27th November 1821 - but seeing this contradicts the reported dates of his death
and the date on the will itself so one of them must be wrong. The will was executed on 22nd December 1821 by Benjamin's daughter Elizabeth. The total of his estate came to just under £2000 which was split between his living children, Grandson Benjamin, and six other people. Benjamin's children each recieved £250, while Grandson Benjamin (Aged just 5 years old) recieved Benjamin's leasehold house and the rents that accompanied it (Amounting to £210). The following is Benjamin's entry in the Death Duty Register:-

There is an online memorial for Benjamin at findagrave.com

Benjamin Farmer and Mary Mills had the following children:

2. Henry Farmer was born about 1773 in Hereford, Herefordshire, England. He died either on 25th Nov 1812 or sometime in Feb 1813 aboard the East Indiaman, "Lord Castlereagh".

3. Benjamin Farmer was born about 1776 in Hereford, Herefordshire, England. Currently, nothing more is known of Benjamin.