Harry Archibald Brock was born on 4th Oct 1883 at 52 Railway Street, Cardiff, Glamorganshire, Wales. He was the fourth child of William Brock and Clara Koster. 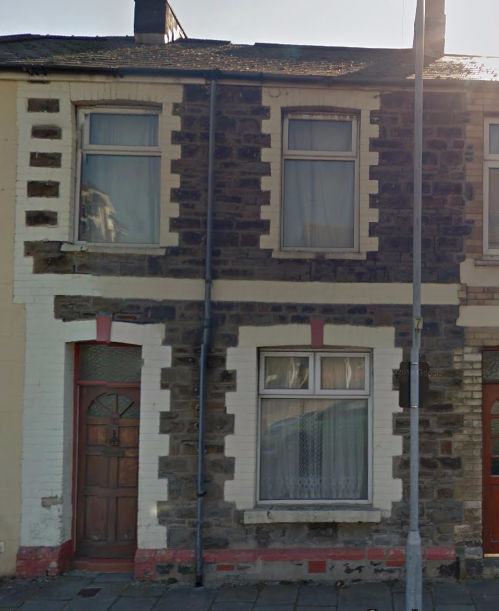 On 5th Jan 1891, when Harry was 8 years old, he started at his second school - St. Germans, Metal Street, Cardiff. The admission record lists his start date, his birth date, the name of his father, his address, that he wasn't exempt from religious instructs, his previous school, the date he left the school, and where he went next.

Previously he had attended Splotlands Board School, but I have been unable to find his records as yet.

By now the family were living at 18 Tin Street, Roath, Cardiff. Here is Harry with his parents and his six siblings in the 1891 census:-

The Brock Family in the 1891 Census

When Harry was 12 years old, his mother Clara died. Presumably he carried on living with father and siblings - most likely some of his older siblings helped to take care of him and the younger children. I wonder if this resulted in him changing schools because on 3rd Mar 1896 he was enrolled into yet another school - this time Crwys Road School.

The family was now living at 13 Alexander Street, Roath, Cardiff. 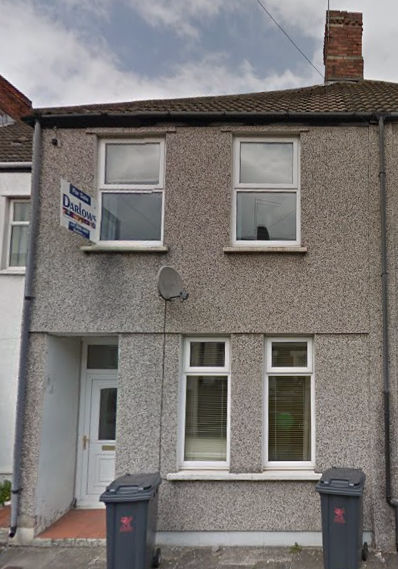 It seems that after going to Splotlands School in 1895 Harry went to Roath Park Board School before he started at Crwys Road School in 1896.

Harry was only at Crwys Road School for 10 days and then on 13 Mar 1896 he left to attend St. Monica's Church In Wales school, Cardiff.

Why change schools again after such a short time? I wonder if a clue lies in Harry's younger brother Frederick's admission to Crwys Road School - just like Harry he started on 3rd Mar 1896, but a note in the admission records states that he was removed the same day. Did Frederick get off to a bad start at the new school and get sent home, causing their father to take Harry out of the school as well?

Harry's father remarried when Harry was 15 and left to work in India leaving Harry in the care of his older sister, Margaret Gwendoline Brock, and her husband, George Etienne Hunter. Harry is recorded in the 1901 census as living with them at 15 Lincoln Street, Cardiff:-

Harry Archibald Brock with the Hunter family in the 1901 census.

By this time Harry had joined the Navy and it can be seen from the census that he was listed as an "Able Seaman". It is possible that Harry joined the Merchant Navy as young as fourteen years old - this would fit in with his rank (source: Ron Hawkins at the National Maritime Museum, Falmouth)

Harry Archibald Brock married Crystal Mary Charles on 8th Sep 1903 at the Register office, Cardiff. Harry was living at 46 Alexandra Road, Cardiff, and it would appear that Crystal lived next door at no.48. Harry is listed on his marriage certificate as a "Mariner". It should be noted that one of the witnesses is Harry's older sister Margaret. 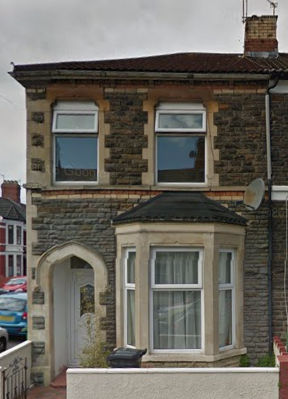 From 3rd Oct 1903 until 31st Dec 1903 Harry underwent naval training for three months on board HMS Spartan which was on harbour duty in Holyhead as a Reserve drill and training ship. 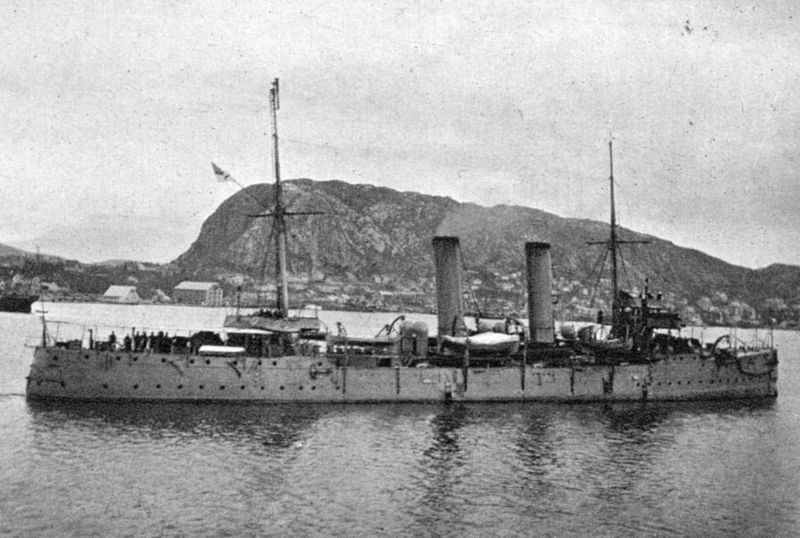 On the 1st Jan 1904, Harry Archibald Brock re-enrolled in the Royal Naval Reserves in Cardiff - his service number was B1753. Harry had been in the RNR twice before, but I have yet to find his previous service records.

The service records also give us a description of Harry that includes his height, weight, complexion, and eye colour. 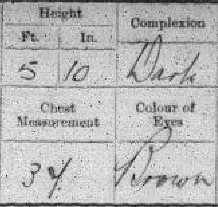 A basic description of Harry in his service records

We can also see that Harry was still living at 2 Wyndham Place at this time:

Harry and Crystal's first child, a girl called Dorothea Olive Crystal Heartsonbell Brock, was born on 23rd Feb 1906 in Cardiff. She was followed the following year by second child, Crystal Mary Isabel Brock on 13th Nov 1907. By this time the family were living at 27 South Morgan Street, Cardiff. Harry was now working for Trinity House as a Lightsman.

From the 22nd May 1909, on and off, until roughly 3rd Apr 1913 Harry served as an Able Seaman onboard the Breaksea Lightship. This Trinity House lightship was based off Barry in the Breaksea Spit in the Bristol Channel. 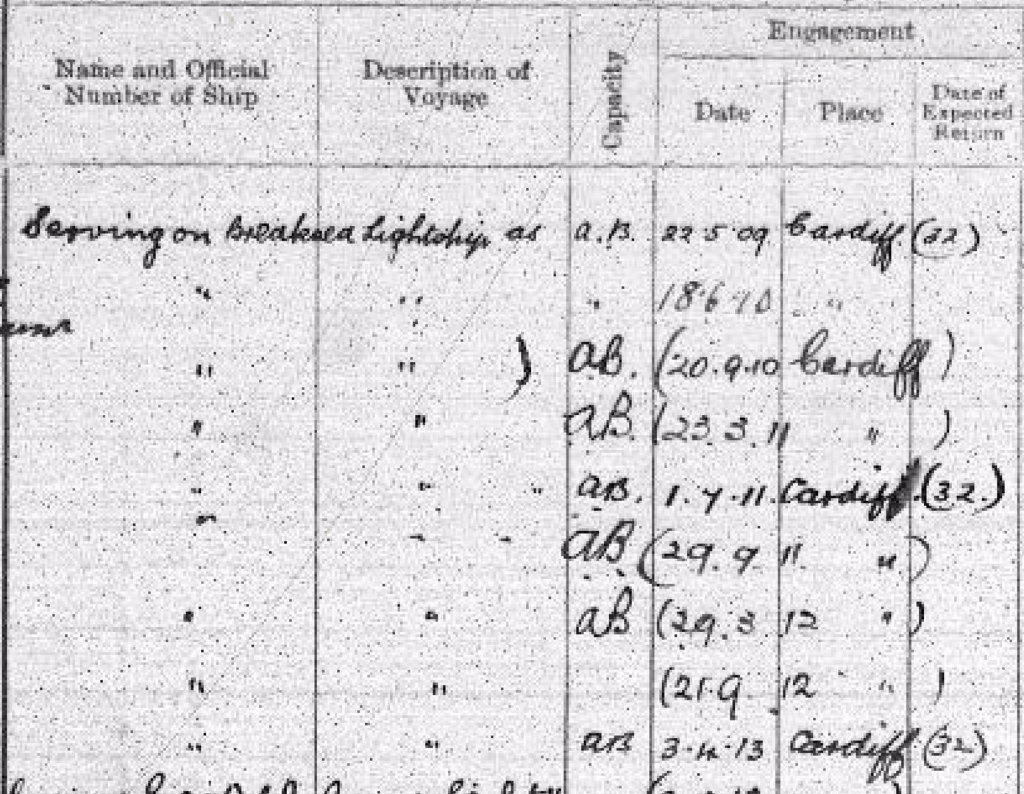 The records also tell us how much pay Harry recieved and which port he was stationed at. Most of the time he was based in Cardiff, but it can be seen from the list that 1910 he spent some time in Plymouth.

Harry's pay and the ports he was at

They also detail travelling expenses for various training courses that Harry had to go on:- 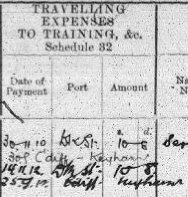 On 14th Aug 1909 the couple's third and last child, Harry Archibald Varyer Brock, was born in Cardiff. By 1911 the family were living at 2 Wyndham Place, Cardiff and Harry was still a lightsman in the service of Trinity House.

The Brock Family in the 1911 Census 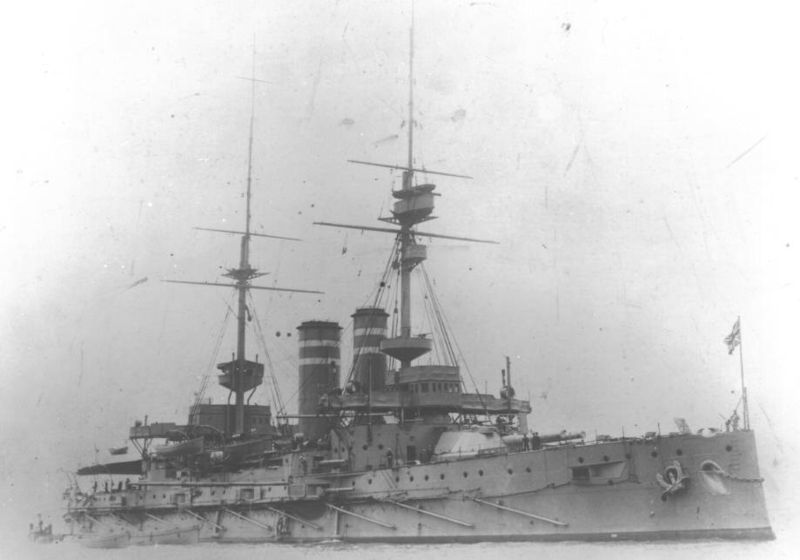 On 9th Oct 1913 Harry was serving on the English and Welsh Grounds Light Vessel:-

It appears that Harry re-enrolled in the Royal Naval Reserves around 1914. His new service number was C3240.

It appears that Harry lost weight over the last few years:- 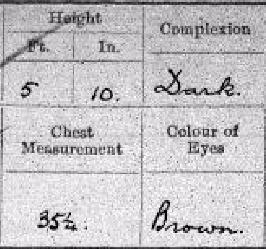 Harry was still employed on the English and Welsh Grounds Light Vessel during 1914 and again in 1918.

On 4th Aug 1914 Harry was called out by proclamation for service in the Royal Navy - this was the day that Britain declared war on Germany and Harry's entry into World War I. 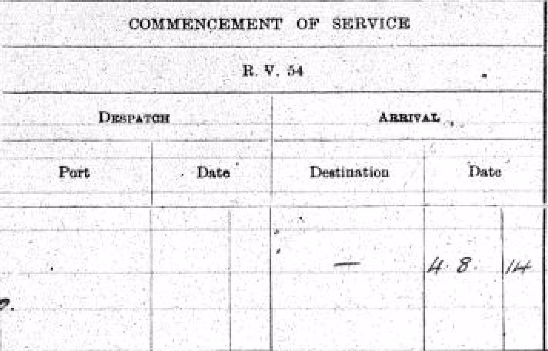 Here are the ports that Harry was stationed at from 1914 onwards:- 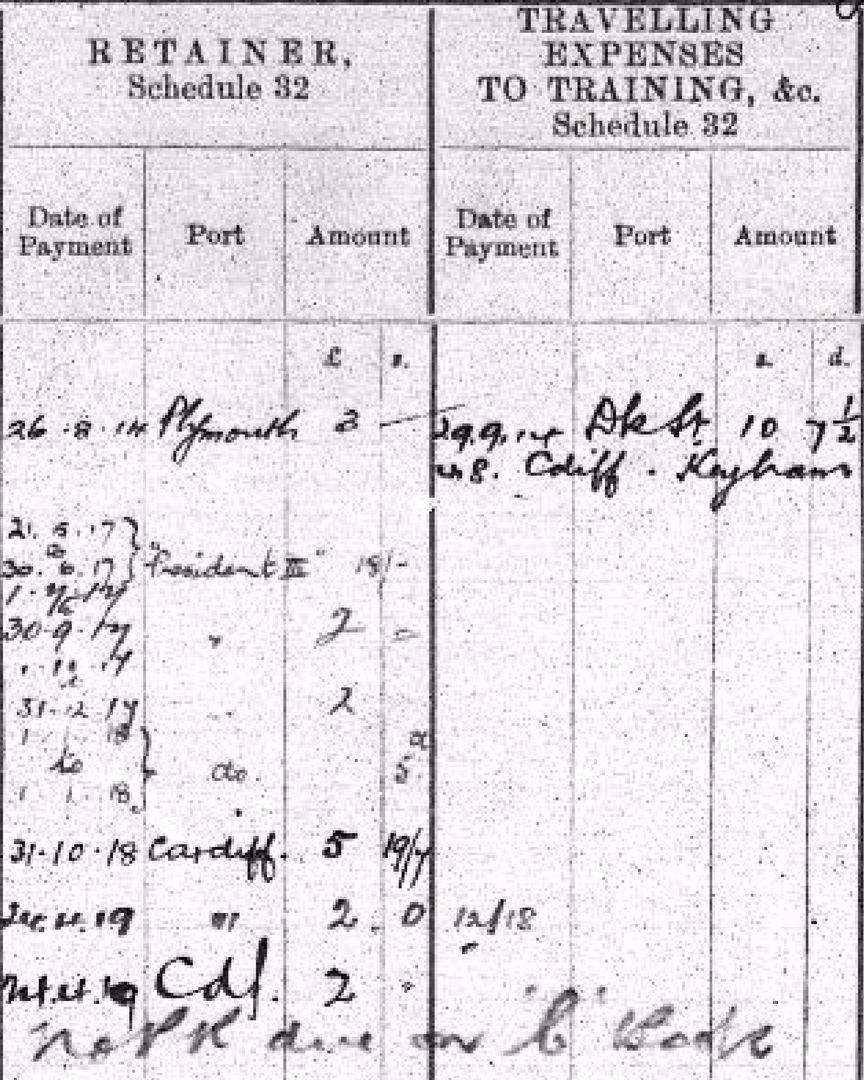 It should be noted that HMS President III was the name given to the Reserve depot accounting base for the Bristol/Windsor/London area.

Harry's first posting of WW1 was with Anson Battalion. 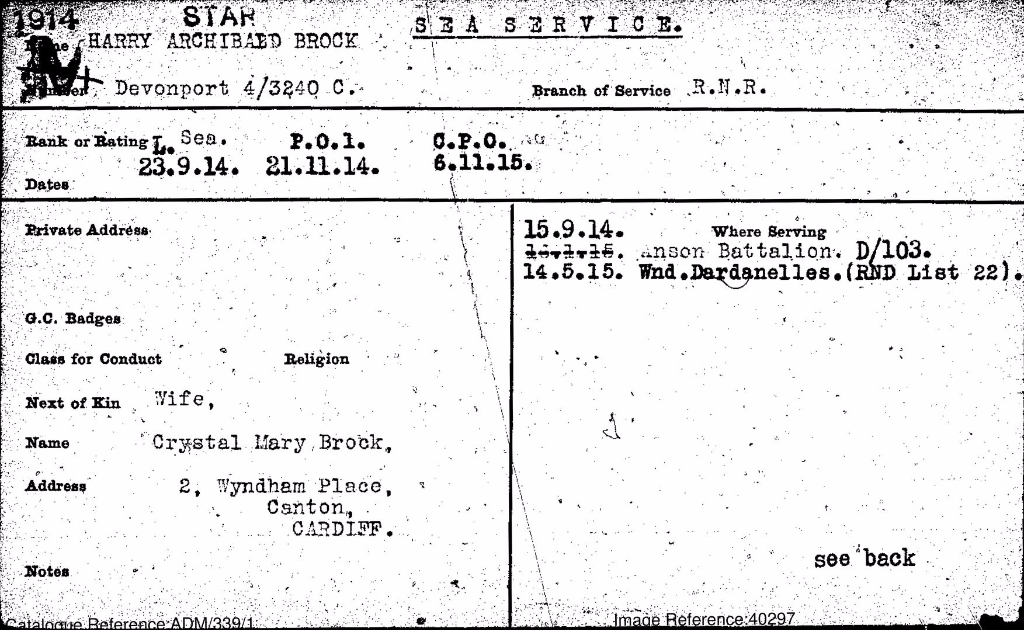 Anson Battalion was one of eight battalions from two Naval brigades that joined with the Marine brigade to form the Royal Naval Division infantry brigade, i.e. they were expected to fight on land. They were given Charger Loading Lee-Enfield rifles from Royal Navy stocks. 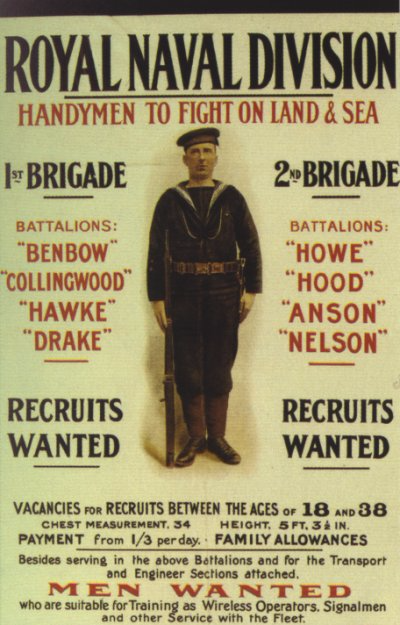 Harry started his war service as a Leading Seaman, but on 21st Nov 1914 he was promoted to Petty Officer, 1st Class.

Harry was at the Siege of Antwerp in October 1914 and was most definately involved in the fighting at Gallipoli. His service card states that he was in the Dardanelles and wounded there on 14th May 1915. Further evidence however seems to indicate he was actually wounded on 7th May 1915. There was a photograph of Harry in his uniform featured in the South Wales Echo on 26th May 1915:-

Mr. Asquith mentioned in the text was the Prime Minister H.H. Asquith, and his son was Arthur Asquith, who himself was wounded a month later.

On 15th May 1915 it is noted that Harry was hit in the right shoulder though the date seems to suggest that he was wounded on 7th May 1915 as opposed to the 14th.

On 26th Jul 1915 Harry was sent back to England from HMS Egmont, the base ship in Malta. 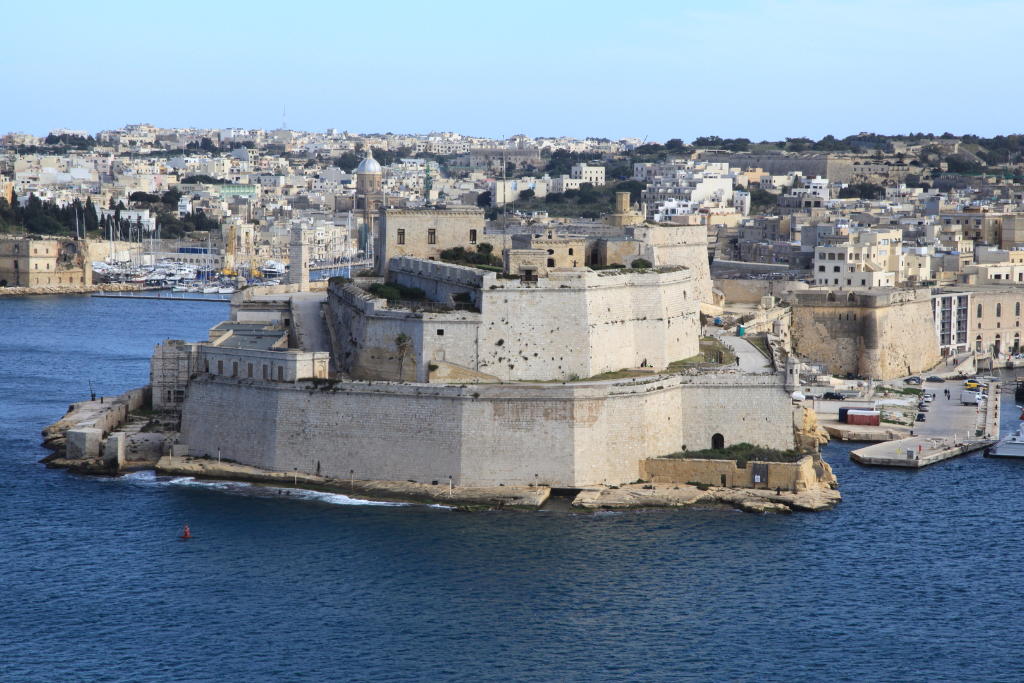 It is now mentioned that Harry's wound was a Gunshot Wound in the shoulder.

It is not until an entry dated 30th Mar 1916 that we get the full story. Harry recieved a gunshot wound to his right shoulder on 7th May 1915 and was taken to Mtarfa Hospital on 18th May 1915. 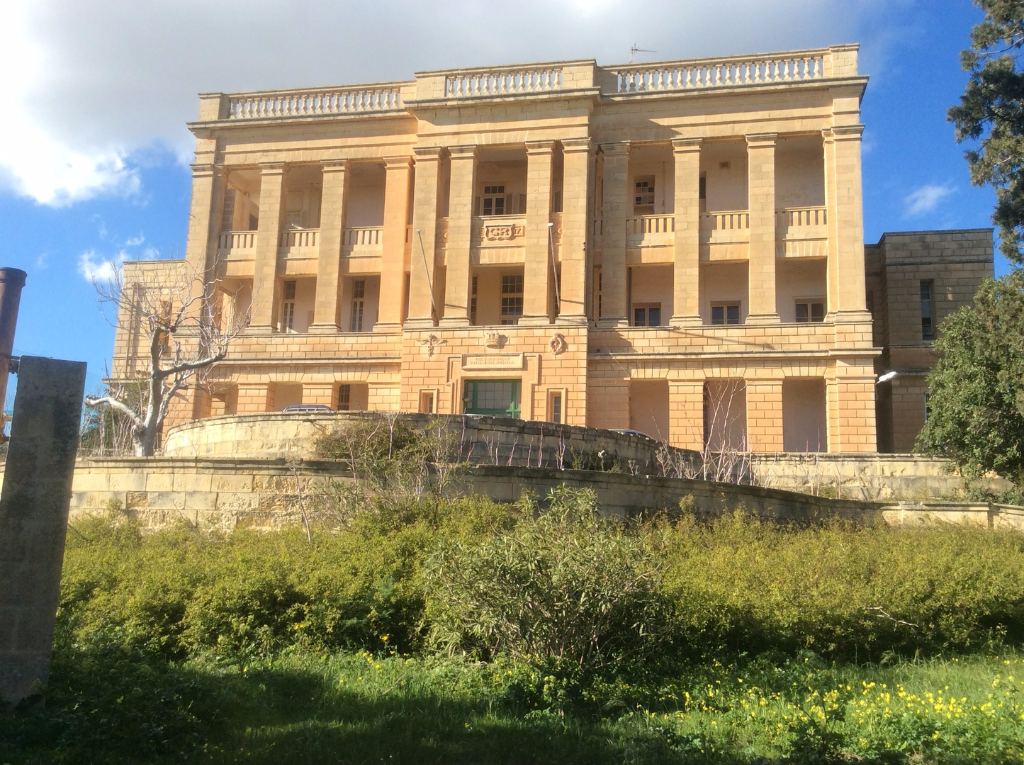 He stayed there until 2nd Jul 1915 when he was discharged to HMS Egmont (see above). Harry was then invalided from HMS Egmont to England on 26th Jul 1917.

On 7th Aug 1915 Harry was admitted to Chatham Hospital with the note "Defective Teeth. No Improvement. His next of kin were notified of his situation on 10th Aug 1915.

It appears that Harry was somewhat better by 17th Aug 1915 when his record card states he was "Taken on Strength" for the 2nd Reserve Battalion.

On 6th Nov 1915 Harry was promoted to Chief Petty Officer.

It could be that there was some sort of confusion or lack of communication happening as the next entry is dated 16th Nov 1915. Harry was transferred to D.Coy as Acting Sergeant Major on 6th Nov 1915.

The next entry is dated nine days after the suspension of Harry's CPO rating but mentions him attaining the rating on 6th Nov 1915. I'm really not sure what rating he is when here!

At some point Harry must have been transferred to the 4th Reserve Battalion as he is then transferred from there to performing Camp Staff Details on 6th Oct 1916.

On 8th Jan 1917 Harry was transferred to Devonport Barracks.

On the 29th Jan 1917 Harry Archibald Brock is again rated a "Leading Seaman" in the Royal Naval Reserves. 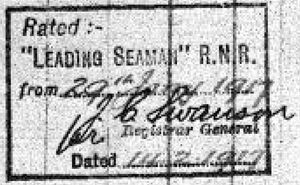 Harry was then released to the Commodore at the Royal Naval Barracks in Devonport on 14th Feb 1917. 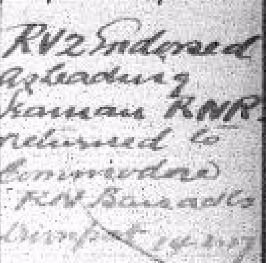 At the end of 1917 and the beginning of 1918, Harry was demobilised from the RNR so that he could return to service with Trinity House aboard the Siren, which was a steam ship, and other Light Vessels based in the Bristol Channel. 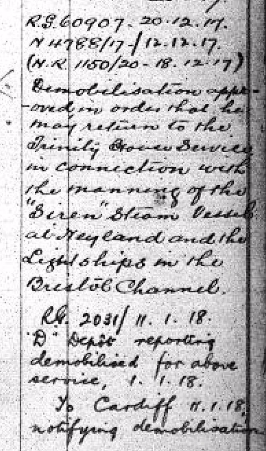 Harry was discharged from Royal Naval service on 1st Jan 1918 from President III as a Leading Seaman. He was described as 1st rate and having had "Very Good" conduct.

On the 18th Jul 1918 Harry is aboard the English and Welsh Grounds Light Vessal as a "Fog Signal Driver". There are also some notes that are quite hard to make out, which seem to mention Harry's Chevron and an Antwerp? Medal. 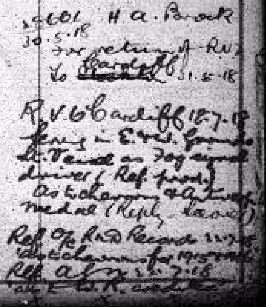 Harry was working again aboard the English and Welsh Grounds Light Vessel as of 17th Oct 1918 as a "Fog Signal Driver". 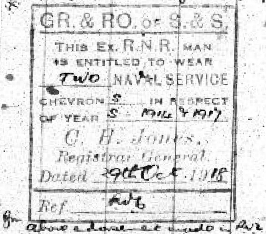 There are a few notes here about Harry's various pay that Harry recieved:- 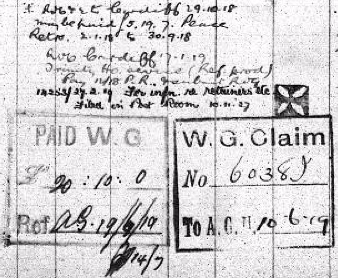